Why My Roommate's Cat is Still a Cat: The Awkward Thing about Enchanted Bridegrooms

My roommate's cat is beautiful. Really, incredibly beautiful: just look at him. 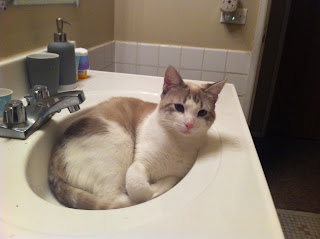 Fairfax is so beautiful, in fact, that we're all convinced he's really an enchanted prince. And yet, we've made no attempt to break the spell.

Why, you may ask?

Because he's seen us naked.

It's uncomfortable. It's awkward. How do you look a hot guy in the eyes after you've peed in front of him? After he's sat on the counter watching you pop your zits? I've cleaned his poop, guys. We had his genitals cut off. How are you supposed to come back from that?

You don't. You just don't. So with happily ever after out of the picture, there's no way we're giving up our adorable cat.

There's really no way things won't be weird with your enchanted bridegroom. I mean, there's pulling your crush's hair on the playground, and then there's throwing a dude at a wall in hopes that he'll die and leave you alone.

In the fairy tale my url comes from, Kong Lindorm, the transformation process involves whipping the poor dude, then soaking him in milk and lye. He didn't have a safe word, guys. (To be fair, his plan before the transformation spell was to eat her. Yet another issue for the marriage counselor to deal with.)

Not that anything comes of the relationship, but the prince makes the little mermaid sleep on a cushion like a dog. And how do you explain to your dad that the monster that wanted to kill him is your boyfriend now?

Some girls get turned into flowers. Picking flowers kills them, guys. And what if he's picking you to make a bouquet for his girlfriend? Awkward. And how many people would ever think that maybe they shouldn't get undressed in front of the botany? That flower has seen things, man.

There's a Schonwerth fairy tale where the princess is under a spell that makes her look like an ugly old hag. The prince is not nice to that hag. Not at all.

And there's more. What if you kind of had a thing for that older lady? What if you fell in love with the Beast the way he was, and then everything changed?

Posted by Halfway to Fairyland at 4:34 PM No comments:

I guess I've just never really understood the quality over quantity thing. Because, like, you can't have quality without a little quantity. You spend forty years working on one book, one play, one painting, whatever, chances are it's gonna be crap. You get bogged down, you know? And there's no room to grow.

Like, sometimes I'll have a week where I just write, like, thirty poems. And probably half of them are gonna be crap. I know they're gonna be crap. I don't care. Sometimes that's kind of the point of them. I'll be on my third poem, and it'll be completely worthless. But then on my twenty-third, maybe I'll try something weird with the line breaks, something I wouldn't have thought of before, and maybe that'll somehow make poem number three salvageable.

I'd much rather publish twelve pretty good books, and maybe they're not perfect, but maybe someone will read them and they'll Matter to that person, than spend a decade writing an amazing literary masterpiece that no one outside of an English class is ever going to care about. Because sometimes, maybe most times, it's not even about all of the perfection you put into something you've dedicated your life to. Sometimes it's a completely random throwaway line that catches readers, that makes them care, that ends up meaning something. And I figure you've got a better chance of giving someone that thing that Matters if you have a bunch of things out there in the world.

You produce enough quantity, and some of it's bound to be quality. And the more you do the better you get. Better is a side-effect of more. And stories die, sometimes. Paintings, songs. You spend so much time trying to make this one thing better, and all the heart leaks out.
Posted by Halfway to Fairyland at 4:15 PM No comments:

Posted by Halfway to Fairyland at 1:21 PM No comments: