Beauty and the Beast Review: Lisa Jensen's Beast: A Tale of Love and Revenge 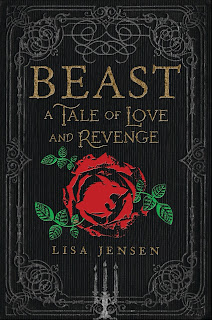 This is the newest retelling of Beauty and the Beast I’ve read. It was a gift from a friend, and I’d been wanting to read it, but honestly if it hadn’t been a gift I might not have finished it.

It’s actually a really great book. But the beginning is extremely off-putting, and there’s not really a way around that—it needed to be, for the story to be able to develop the way it did.

So. Trigger warnings. Implied/referenced abortion, and rape. The first one I’m not going to dwell on, because it technically didn’t happen. But you spend a good chunk of the book thinking it did. (Well, I did. Now you don’t have to.)

But the other thing. Well. The prince who will become the Beast rapes our narrator. Not super explicit, because this is YA, but it’s very clear what happened, and it’s strongly implied that he’s done it to many other women in the past.

The only reason the book works is that there’s a complete disconnect between the Beast and the prince. He has no memory of what he did or who he was before the spell, which turned him into a Beast and our narrator into a sort of telepathic candlestick.

The fun thing about this book is that it spins out in a completely different direction from an other Beauty and the Beast retelling. Because we cannot allow the spell to be broken. Beauty isn't the main character, and though she’s a nice girl, she almost fills the role of antagonist—her entire time at the palace is spent hoping frantically that she won’t agree to marry the Beast, because we don’t want to lose our ugly amnesiac sweetheart to that evil prince.

Two important things to note for this story. The first is that this is one of the versions where our guy genuinely did something very wicked before being transformed—not some vague, undefined Bad Thing as in a lot of stories, and not Literally Nothing, as in the original novel. But this isn't a redemption story.

The second thing is that this is the first book in our series where the Beast is still a Beast at the end of the story. More and more often, the tendency is to be drawn more to the Beast, to want him to stay the way we first knew and loved him. Who is this hot guy? Give me back the person I fell for!

It’s especially pronounced here, since the prince and the Beast are essentially two different characters. But it’s a pattern that’s emerging in general—I call it “The Unothering of the Beast.” We’ll talk about this—and it’s implications—more as the series progresses.

Stand-Up-For-Herself-iness of Beauty: abysmal, but we don’t care

Human at the End? No

Who learns and grows the most? The narrator, who is neither Beauty nor Beast

This post was available on week ago for Patrons. Click here to learn about supporting me on Patreon.

Posted by Halfway to Fairyland at 6:00 PM