Beauty and the Beast Review: Stacey Jay's Of Beast and Beauty 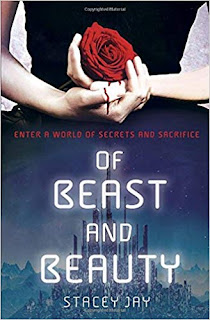 This book is…a lot. There are so many things to say about it.

So we’ll start with this: technically it’s sci-fi. It all takes place on another planet. None of the characters are technically aliens, but a lot of them are technically mutants, adapted to survive the new planet. But it doesn’t feel like sci-fi. It reads like a fantasy.

The second thing is a not-so-great one. Overall I really enjoy this book. I think it’s very clever. But this one thing—well. You don’t give little blind girls reading books a blind princess to relate to, then take away her blindness as part of her happy ending. That’s bad. That implies that you can’t be blind and live happy ever after.

There were people in the background—not present enough to be considered characters—who were missing both arms and legs. Who were missing chunks of their faces. Who weren’t exactly equipped to have good lives in a setting like this. And healing them, I guess I can understand better. It’s a quality of life issue. But the blind girl and the mute girl were awesome, capable characters who didn’t need to be healed to have happy endings, so to heal them feels almost cheap. It’s not solving a problem as much as it’s taking away valuable representation.

Okay. On to the good things.

The main characters are a beautiful young woman and a man described as “Monstrous.”

But it’s the man who attempts to steal a rose, the man who is held prisoner by the woman, and the man whose departure to help his family and delayed return nearly result in the woman’s death. It’s the woman who gets the transformation scene at the end when the man says “I love you.”

And all of this is done so cleverly that it doesn’t occur to you, for quite some time, that the roles have been reversed, that the woman is the Beast and the man the Beauty. Which I suppose is what comes of getting caught up in physical appearances in a story that’s literally about how deceiving physical appearances can be.

The Beauty and the Beast relationship is usually a very solitary one—just the two of them alone in an enchanted palace. Our girl here is a princess, though, and then a queen, with a court to manage and a city to care for. There’s a lot of political intrigue that a story like Beauty and the Beast doesn’t usually get into.

The story ends with the power of love bringing life to a dying planet, everyone’s disabilities erased, and everyone’s body changing in some way to better adapt to life on this planet. The characters are surprisingly nonchalant about major physical transformations. But it’s a fun story overall.

Adorable awkwardness of Beast: Sadly none

Human at the End: Not really, but that’s because a transformation did happen

Who Learns and Grows the Most? About equal

This post was available on week ago for Patrons. Click here to learn about supporting me on Patreon.

Posted by Halfway to Fairyland at 6:00 PM