I didn’t find out about this story until I decided to read the complete works of the Brothers Grimm straight through in high school, and oh my goodness. Guys. It is the best. And also the worst. But mostly the worst.

It’s one of those stories where the princess has to get married, but she’s set up certain impossible qualifications for her suitors. Pretty standard, right? Except this girl has a bloodthirsty bend. Basically, it’s hide and seek to the death—you hide all day, she marries you. She finds you, you die. Head on a pike outside her tower.

Now my first question in situations like this is always “Why on earth would you want to marry the chick?”

Like, power, influence, money, I get it—there are certain advantages to marrying into nobility. But guys. Think about this. Do a risk-reward analysis. Is your quality of life really that bad?

Ninety-seven dudes say yes. And boy do they ever suck at hide and seek.

On to our dude. His story is standard, too. Youngest of three brothers, saves the day after the older two screw it up. He meets some animals in the woods, like youngest sons do, and they offer to help him someday when he spares their lives. You all know where this is going.

Oldest brother hides from the princess, gets found, dies. Second brother, same thing. We’re up to ninety-nine heads on posts along the wall. The older ones are probably in a pretty nasty state of decomposition by now.

Youngest boy tries, his animal pals hide him, and he wins Hide and Seek: Ultimate Death Match. The princess is very impressed, she agrees to marry him, and they live happily ever after. So she decapitated his brothers. So what? She’s a princess.

Seriously. These youngest son types always seem so smart and level-headed, and then they go and marry girls who obviously want them dead. Come on, man. Quit while you’re ahead. The deal is usually half the kingdom and my daughter’s hand, right? Take the kingdom, leave the hand. Or ask for gold instead. Dude. Don’t marry the girl who wants to kill you. This is not hard. The right choice is clear. Just say no, man. Just say no.

Btw, if you’re wondering about the title, he won the game when his fox friend transformed him into a sea-hare. 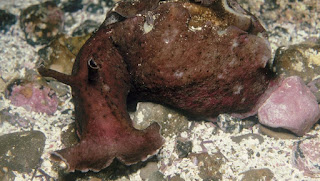 Posted by Halfway to Fairyland at 7:21 PM