Why We Don't Have Sex with Cows (Looking at You Here, Pasiphae)

(Betcha didn’t know the Minotaur had a name.)

I love Asterion, okay? I want Asterion to be real so he can be my friend, because his life sucks and he deserves a friend. Usually when I want someone to be real, it’s so I can punch them really hard for being Extremely Stupid and/or Terrible, so this is a new and exciting feeling for me.

Let’s review the story of the Minotaur quick, okay?

So we’re on Crete, and we’ve got King Minos, right? And he’s big on the Poseidon worship, all about the sacrifices and crap. So one day he gets to praying or whatever, like, “Please give me something super awesome so that I can give it back to you because nothing I own would be a worthy sacrifice.” Like, legit plan, but then the dude gets this awesome white bull in response, and decides it’s way too cool for a sacrifice and he’s gonna keep it for himself.

So Pasiphae gets a dude to make her a wooden cow she can hide in, and, well, I’m not gonna speculate on the logistics, but nine months later, a little half-bull baby is born. They name him Asterion, after his grandfather. Step-grandfather? Whatever. It’s Minos’ dad.

They call him the Minotaur, because he’s Minos’ bull. Kinda. They build a giant maze, plop him in the middle of it, and start feeding him Athenians by the boatload.  Some brave Athenian prince comes along, kills the monster (with the help of the monster’s sister), and lives happily ever after.

And as usual, I’m in a ranty kind of mood today, so let’s get into this.

Step one: the brave Athenian prince. His name is Theseus, and he has two daddies. (Greeks didn’t quite have a handle on genetics yet, T’s mom slept with Poseidon and the king of Athens in the same night, and we’re totally skipping the paternity tests—you’re both the father!)

Exploits of Theseus’ youth: When she was, like, seven, he kidnapped Helen (see: Trojan War, Most Beautiful Woman in the World, Face that Launched a Thousand Ships, etc, etc) with the intention of marriage, presumably after puberty had set in. Then he left her with his mom and went to help his friend kidnap Persephone, Queen of the Underworld, and force her to marry him. (Spoiler alert: this did not end well. And while he was gone Helen got rescued, and lived to be kidnapped another day. Paris, Aphrodite, hello again, consent issues.)

The aftermath: So Minos’ daughter Ariadne helps Theseus navigate the maze to find and murder Asterion. Then she runs away with him, and then they stop on an island quick, and then he leaves her there. (In his defense, Dionysus called dibs or something, and you don’t say no to a god. But abandoning the chick without an explanation, after she risked everything for you? Come on, man. And you know she liked you. She’s never even met Dionysus. What if she hates him?)

Then he keeps on heading home, and forgets to change his sails from We’re Going to Crete to Die Black to Yay I Killed the Minotaur White, the way he promised his dad he would. Athens dad, not ocean dad.  So dad thinks his son’s been eaten and goes and kills himself. Great job, T. Fantastic.

Asterion is half boy, half bull, right? With the implication that it’s the whole bull thing that launches him into monster status. But last time I checked, cows? Not big carnivores.

Step 3: The history. The thing you need to know about Asterion and Ariadne is that they had a big brother. A big brother who was killed by Athenians.

(Sidenote: Can you believe spell check doesn’t recognize Ariadne? What is wrong with this thing? It’s like it doesn’t even know me.)

So basically this is a revenge gig. Minos wants to get back at Athens for killing his kid, and decides to use his wife’s illegitimate monster child to do it. Does this have anything to do with the Minotaur’s desperate craving for human flesh? Probably not. He’s just sufficiently scary to keep Athens in check, and a handy excuse to demand tribute.

Step 4: The confirmed, real life history. Because as we all know, the winners write the books. And the Athenians definitely won here.

To be clear, I am not discussing the sort of history-history where a man-bull hybrid actually existed, because I’m reasonably certain that’s not how biology works.  We’re talking like, the history of mythology. Stories of the Minotaur definitely existed in Crete, but the versions that were preserved and are told today came from Athens. Athens, where Theseus is a hero and Asterion is a monster.

Here’s some pottery from Crete. Look at cute little baby Asterion, sitting on his mom’s lap. Does that look like a man-eating monster to you? 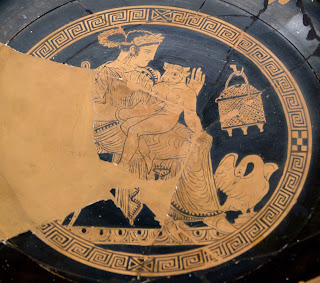 In conclusion, Asterion rocks, and Theseus can feel free to get trapped in the underworld again at any time now.

Posted by Halfway to Fairyland at 5:46 PM